Working For Nothin’ And Getting The VFX For Free 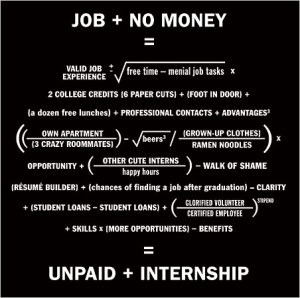 Gnomon School of Visual Effects recently announced that they are starting a division called Gnomon Studios. Students will get to work on feature films in the hopes that the experience will give them a competitive edge in finding a job.

It sounds like a noble idea at first, but then you hear stories about the students like this:

… I talked to the intern who works here. He is no longer a student and did work on X for about 10 weeks. He said the students didn’t like it because they had to PAY to work on the show.

I told him that there might be a case for them to get paid but he was hesitant because he doesn’t want to burn bridges. He said it would be awesome to get paid for the work he did. He thinks it would be alot of money. …

Situations like these are nothing new in our industry. There is a whole market of businesses that prey upon naive students to do free work. Hell, at Meteor Studios, they preyed upon experienced artists and got them all to work for free by getting them to fall for the cult-like allure of the project. Even Yair Landau, former Sony Pictures Digital president, has caught on to this idea getting people to competitively work for free.

It’s one thing to have money stolen from you, it’s another thing to have it stolen from you before you even get paid. What pisses me off even more about this is that the students at Gnomon had to PAY to work for free while taking other classes. It’s a system so nice they get to steal money from you twice.

Do people think artists and technicians in the vfx industry are that fucking stupid?

Well those students ultimately agreed to work for free right? Sure. The problem is that it’s ILLEGAL. Worst of all, billion dollar corporations like Sony got involved in this. It’s almost like organized crime.

Alex Alvarez should be embarrassed for backing this kind of crap. He knows better. Couldn’t a compromise have been made to pay the students while they worked on the project? Couldn’t Sony offer their proprietary tools for the students to work on their own projects and learn?

This is why I started this blog. I want to send a message to every vfx facility that thinks they can get away with this:

I am on to your ass. If I work at a facility and find out you are getting students to work for free I am going to make you famous.

Fellow artists should support this cause and do the same. The following artists worked on Fringe for Gnomon Studios:

If you know any of these artists tell them to contact  The Animation Guild and read the whole post.

It’s times like these that help me answer skeptics who ask “what does the guild do anyway?” So I tell them:

They fight for you so you don’t have to.

This entry was posted on Tuesday, June 29th, 2010 at 11:02 pm and is filed under Uncategorized. You can follow any responses to this entry through the RSS 2.0 feed. You can leave a response, or trackback from your own site.