Gravity VFX Supe: US Pros Not Young Or Hungry Enough To Compete 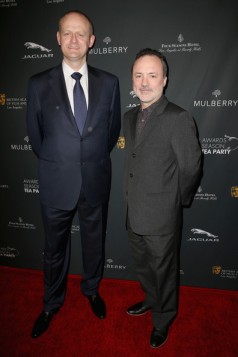 After last year’s disgraceful presentation during the Oscars some of us in the VFX community we’re relieved to hear that the Academy would do a better job this year. Given that, my jaw dropped to the floor from what someone in our own community had to say about US vfx professionals.

Oscar Nominated Gravity VFX Supervisor Tim Webber was quoted in a recent Guardian article on why “British VFX talent is leading the world“:

We learned to do it significantly cheaper, and used our innovation to be leaner and more flexible operations. In the end, our people are younger and hungrier than they are in the US.

This isn’t the first time that kind of statement has been made by UK film professionals. I hope that quote was taken out of context or else he’ll probably issue a standard mea culpa to avoid a fiasco but think about that last sentence for a second. Could you imagine someone from the US VFX industry saying something similar like:

…there’s still no better place to make movies and television and music than right here in the United States.

Entertainment is one of the bright spots of our economy.  The gap between what we can do and what other countries can do is enormous.

Actually someone did say that: President Obama at Dreamworks and FXGuide’s Jeff Heusser and I discussed how incorrect he was and I even used Gravity as an example. However, if I personally came even remotely near saying what the President said I would be called racist or xenophobic. In fact, I don’t even have to come close to that and I routinely get called racist by respected professionals in the industry with no basis in reality.

For example, a few weeks ago I was alerted to a thread on VFX Solidarity where a Method Studios VFX Supervisor I never met named Sue Rowe labelled me a racist. The accusation was baseless and I wanted to ask her how she came to that wild conclusion. There was no response.

Instead I was sent a private email by her apologizing for calling me a racist and blaming the clumsy words on typing while getting her children ready for school. In another incident, the people behind VFX Progress Group were also accused of racism by another individual because of their site’s old west theme and “circle the wagons” slogan. Again, no basis in reality.

There seems to be a constant theme where US VFX professionals must discount their efforts to avoid disrupting some zen like idea of “global solidarity” while international pros get to make local efforts to give a national identity to the VFX industry in the form of location specific organizations. When US VFX professionals even talk about doing something similar they are routinely accused of jingoism, racism, and xenophobia in social media.

Yet statements like Mr. Webber’s go unchecked and what makes it particularly disappointing is how obviously wrong it is.

This past week the US VFX industry welcomed Mr. Webber and Framestore professionals with praise at the VES Awards. I hope Mr. Webber noticed that a good number of US VFX professionals were also winning many VES awards.

Were the unionized US-based VFX professionals that worked on Frozen not young or hungry enough? What about the US-based VFX artists of Digital Domain (who worked on it while the company was in bankruptcy) and ILM who worked on the other Oscar nominated films like Iron Man 3, Star Trek, and The Lone Ranger. Some of those people are my closest colleagues and friends: They aren’t just hungry, they are tenacious competitors. They are Soldiers.

What Mr. Webber and other critics need to understand is that we are having a demonstration on Oscar Sunday not because we are against work being done in international locations, but it’s because we object to a subsidy race in which the VFX industry expects talent to chase their jobs to the next location offering more free money for US producers. Mr. Webber would be surprised to know that there are a very good number of UK and other international professionals who have donated to our legal effort because like many US VFX artists, they too suffer from a cycle of displacement caused by subsidies.

I’m disappointed that Mr. Webber doesn’t recognize this problem. 20% of Gravity’s VFX costs were paid by the UK taxpayers and subsidies have dominated the UK’s ability to do work there since its infancy. Framestore even had to open a satellite facility in Canada because of larger subsidies and their own CEO admits they would lose up to 75% of the work without UK government assistance for US producers. In fact the UK recently had to increase the amount they offer.

How can you have the audacity to argue how powerful the UK VFX industry is over others when at the same time you need so much help from the government, especially when the vast majority of work would be gone without it. At the same time, so many UK VFX artists demand that UK facilities adhere to better labor conditions, overtime, and EU mandated limits to work hours.

This entry was posted on Saturday, February 15th, 2014 at 12:28 am and is filed under Uncategorized. You can follow any responses to this entry through the RSS 2.0 feed. You can leave a response, or trackback from your own site.

166 Responses to Gravity VFX Supe: US Pros Not Young Or Hungry Enough To Compete